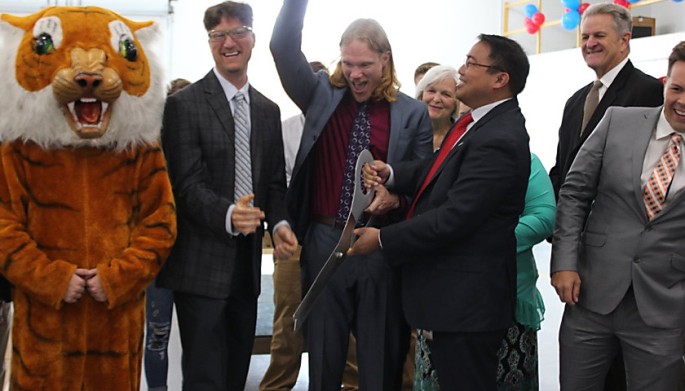 Perhaps the foremost expert on changing school culture in Tennessee is Dr. Ryan Jackson. People from across the country have taken notice of the amazing turn around he has done at Mt. Pleasant PreK-12 School in Mt. Pleasant, Tennessee. Ryan Jackson is beginning his 3rd year at Mt. Pleasant School in Maury County, and the culture shift that he has instigated is nothing short of amazing. We wanted a deeper probe of what he was doing, so his methods could be replicated.

In 2016, when Ryan Jackson first came to Mt. Pleasant School, it had a negative stigma attached to it. He immediately realized that the school lacked an identity. Being a firm believer in Maslow’s Hierarchy of Needs, he realized he needed to create a sense of belonging. The first thing he did was create ‘The Mount.’ More specifically, #TheMount which was strategic for a couple of reasons. Jackson relays, “One, it side-stepped the stigma. This was new. Some people thought it was like putting lipstick on a pig. But it did create a psychological shift. ‘We are The Mount’, not the old Mt. Pleasant and everything you thought about Mt. Pleasant before July 2016 has just changed including how we identify ourselves.” He continued, “It was more than just a rally cry; it was the beginning of this new identity and getting people to see Mt. Pleasant differently so we could one by one, person by person, student by student, teacher by teacher, community member by community member get them to come on board and feel like they belong.” It was not an overnight process but through repetition, constant branding, constant messaging, it was successful.

We have learned, as educators, that if you don’t tell your own story, someone else will tell it for you. Ryan Jackson made social media an integral part of the culture shift. He stated, “Social media is a high yield strategy that costs absolutely nothing financially, just a time investment. It gives everyone, but specifically the immediate community, the windows of insight into what’s going on at the school. It gives them a proud thing to hang their hat on that they didn’t have in the past. I wanted them to see the fact that we had seven different CTE programs. We had multiple forms of art being represented. I wanted the community to see some of the cool project-based learning experiences that we had for kids…things that they would not know if they weren’t here on a day to day basis. I wanted the community members to have access into the school day via the social media platform. By doing so, we are getting the attention of more than just the community, but also the state and the nation as well.”

Jackson sees the social media posts as sort of a mini-commercial for his school. The community now sees them as a positive influence and thinks, “Wow, things really are changing [at Mt. Pleasant].” He reiterates, “Not only that, social media gives you the opportunity to highlight teachers, students and programs while reinforcing the belonging. When people have emotional connections to something, they will share it with others. You are literally evangelizing your message, your school.”

The rebranding, done primarily via social media, has also led to grants/partnerships from the community. Jackson attributes the Theater Renovation Grant for $67,000 that they got from Lowe’s to social media branding. These organizations vet the recipients of their grants, and when they google Mt. Pleasant High School, they start to see everything that they’ve done. Jackson reminds us, “No school is perfect, but you want to make sure that daily you are putting in enough credit that when something bad does happen, your credit is so high that there isn’t a negative impact.” They also got a $500,000 grant from Parker Hannifin Corporation with which they built an Innovation Lab. “Any school that is not leveraging social media power is missing an incredible opportunity,” Jackson emphasized.

Jackson admits that grants have assisted in the cultural turn-around by being financial affirmations. “Organizations see their money going to a school as investment which they believe they will see a return on. Those grants help to foster a shift from momentum to inertia. And now we are a school that cannot be stopped.”

Working with educators, we know there are a few who are resistant to change. When asking Jackson how he dealt with those who did not buy into his vision, he stated, “In any organization, there is always going to be the ‘toxic 2%.’ Annually, you’ve got to get rid of the toxic 2% because if you don’t, it can be like cancer and it will spread. Teachers/staff must grow or go. You will have that core group of people who will buy into your vision immediately.”

Ryan describes himself as a strength-finder leader. “We focus on our strengths and talents while managing our weaknesses. We devoted the first year entirely to changing the culture. We didn’t start on changing the curriculum until year two. We lifted people up, building capacity, building, supporting the teacher leaders. Then they took their network and influence to bring over the early majority. We showed wins in grants, school discipline, attendance etc. When you see your school logo on T-shirts at Walmart and RiteAid, the late majority is starting to look at it like ‘Wow, I want to be a part of this thing.’ Now we have buy-in from the early and late majority.”

Changing the school culture has not just changed the school, but it has transformed the community. Mt. Pleasant is a community of about 5200 people. Mt. Pleasant School is sort of a mini school system. Jackson explains, “[The school] has been a catalyst for everything. We have been positioned as the lighthouse for rural development and that starts with education. People are only going to move back to Main Street, America if they think their children have a great shot at an excellent education.”

Jackson continues, “We understood that fundamentally and made sure the city had something they were proud to hang their hat on in terms of their schools. Once we gave them a taste that this could turn out to be something incredible, we saw parental involvement go up. We started to see the community come out for football games and other events. Every 30 days we are showcasing something new and different such as the ‘Tiny House’ project we are working on or a mid-town barbeque festival with the community. Now we have the cooperation with the city government to raise $155,000 to build a Splash Pad for the community. It’s a multitude of things such as building an authentic partnership with city government and its schools so we can do things together that will improve the quality of life. It’s showcasing the programs in such a way that you can get parents and business owners excited about their local schools.”

Not only that, when you create a high-profile buzz with the rest of the country looking at you, it becomes infectious. Jackson proudly brags, “When the folks in Mt. Pleasant, Tennessee hear that people from Palm Beach County, Florida, the 11th largest school district in the nation, are coming to visit to see what we are doing, they can’t argue with success. That is the attitude you have to adopt. The city is starting to feel like a winner again and it is long overdue.” He reiterates, “After you feel like you belong, then you will start feeling efficacious and capable. Then and only then can you transfer to self-actualization, just being your best. Mt. Pleasant’s new business owners are feeling capable. Now let’s give this thing a go because we all feel like we belong.”

When Ryan Jackson was asked what advice he would give to struggling administrators, he said, “First and foremost, be a leader, not a figure-head. You have to be present. People want to see their shepherd – ten toes down leadership. You are in the halls, in the classrooms. You’re engaging the students with fist-bumps, high-fives, ‘how you doing?’ You need to have mini conversations with kids and identify their passions. Get to know your staff on a personal level. For far too long leadership programs have emphasized that being a good manager is where you draw a firm line. I think things have just changed. [As administrators], we have to be smart, we have to be savvy and we have to be professional, but most importantly, we have to be present.”

With all that being said, part of partaking in a cultural shift is to change things. Jackson declares, “Sometimes, you’ve got to disrupt the norm. Be comfortable in being a stimulus for change. Great leaders are comfortable with dissent. You have got to understand that not everybody is going to see things as they should right away. But it is our job as a leader to influence them. Leadership is the art of influencing and you cannot influence people from behind a computer screen. If you are sending emails that are fear-based, that may last for a little bit, but everything is built on relationships. You have to establish those kinds of ground level relationships first.”

Jackson concludes, “It is your job as an administrator to become your biggest evangelist. Share your story. Highlight your success. Don’t be afraid to share some of your struggles or setbacks, because we are all human and fallible. We are looking to learn from our networks. So, you share within your networks- ideas, struggles and celebrations- in an effort to get better together.”

His biggest piece of advice is to “get out of the office, get in the hallways, in the classrooms, in the community. Be present at games and events. Get to know your students on a first name basis. Kids get excited when they know you know who they are and what they are passionate about. That stuff is life-changing; it’s psychological solutions. You can’t put a dollar amount on that.” No school in Tennessee has changed its culture more than ‘The Mount’. This school culture is an example of a strategy that other schools and districts can duplicate.

Bethany Bowman is the Director of Professional Learning for Educators of Tennessee, a non-partisan teacher association headquartered in Nashville, Tennessee. Permission to reprint in whole or in part is hereby granted, provided that the author and the association are properly cited.